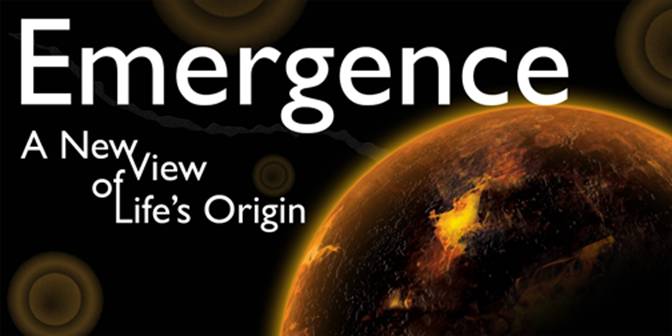 Every living thing we know of derives from existing biology, but scientists still don’t agree on how abiotic molecules originally bootstrapped themselves into the building blocks of life almost four billion years ago. The new exhibit, Emergence: A New View of Life's Origin, explores the most fundamental questions about the origin and evolution of life on our planet and offers scientists’ latest insights about these complex questions.

A collaboration between the New Mexico Museum of Natural History and Science, the Santa Fe Institute and New Mexico Highlands University, the exhibit was developed, fabricated, and installed with funding from a $162,822 grant from the National Science Foundation. The exhibit team, in addition to researchers, educators, and exhibit designers, included media arts students at New Mexico Highlands University and Americorps volunteers.

Santa Fe Institute Professor D. Eric Smith says the exhibit covers recent discoveries made possible by the use of improved mathematical and computational techniques. It covers the formation and geologic history of Earth, early life forms, inorganic and organic chemistry leading to life, and the formation of biological structures such as DNA, RNA, and proteins.

According to Media Arts Assistant Professor, Megan Jacobs, “The exhibit offers insight into important issues like global warming, the potential cure for diseases, and how life could have developed on other planets. Our students grappled with complex scientific ideas to make them visually interesting and understandable for museum patrons of all ages.”

In addition, Jacobs added, “The process has been an invaluable experience for the students involved. They have learned how to distill complex information, as well as gained experience in how to collaborate with scientists and museum professionals. These are valuable skills that will help students make the transition from student to professional.”

The centerpiece of the students’ work is an illustrated timeline 16-feet long and eight-feet tall that traces the evolution of earth from its formation 4.6 billion years ago to 400 million years ago.

First-year media arts graduate student, Gabriel Garcia, developed the design concept for the timeline. “The design uses a double helix DNA strand that guides the viewer through a sequence of events explaining the significant moments of creation, with each strand representing the geosphere and biosphere flowing through time.” Garcia said. “The texturing of the helix illustrates geological processes that changed earth’s once lifeless surface to the flourishing terrestrial landscape we see today.”

“Science is a global, universal experience. It was awesome to help develop an exhibit that shares profound information about life’s origins,” Garcia said.

The students created their work for the museum though the New Mexico Highland’s University Media Arts Department’s Program for Interactive Cultural Technology, PICT, a partnership with the New Mexico Department of Cultural Affairs.

Mimi Roberts, Director for Media Projects at the New Mexico Department of Cultural Affairs, says the exhibit, “allows us to use new technologies to make the exhibit expandable and updatable as new discoveries are made. Origin of life research is happening all over the world, but some of the most important and exciting discoveries are being made right here in New Mexico.”

Researchers at the Santa Fe Institute, which specializes in the cross-disciplinary study of highly complex systems, led the creation of the exhibit’s scientific content, relying on the latest insights available at the forefront of geology, geochemistry, biology, mathematics, and computation.

“The Highlands media arts students developed professional museum quality work that really impressed us,” said Elena Sweeney, New Mexico Museum of Natural History and Science Interim Executive Director. “They used technology in innovative ways to interpret scientific material and the exhibit has a very dynamic, interactive feel to it. We are a proud partner in this project and look forward to sharing this new exhibit with the public.”

Through hands-on exploration, interactives, and a unique 3-D video filmed in the Carlsbad caves, you will discover the latest research on the origin of life, and how this quest for knowledge has applications as far-reaching as informing data received from Mars and curing disease. Don’t miss Emergence: A New View of Life's Origin. Open July 1, 2011, at the New Mexico Museum of Natural History & Science.
Search