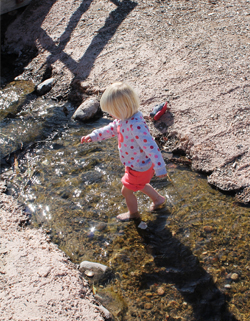 For people that have never been here, they don't usually associate Albuquerque with a beach. But, there is one. It's called Tingley Beach and it's a pretty cool spot. If you're not sure where it is, Tingley Beach is near the Rio Grande and just a few minutes from Old Town. It's a nice, peaceful place to spend a day in the sun. Especially for kids.

I have two very active and curious daughters (age 2 and age 4). They like playing outdoors and want to see new places and do new things. Tingley Beach is perfect them and we've been there several times over the last year or so. They can feed the ducks, climb over rocks, play in the stream, run across the bridge and watch people fish. They love it and so do I!

Last time we went, as we were walking toward the lake, a sweet older man saw noticed that my youngest daughter was walking without anything in-hand. So he asked her, "Are you going to feed the ducks, honey? Do you want some of my bread for them?" Her eyes lit up and she looked at me to see if it was okay, then ran over and took the bag of old bread crumbs from him. She then ran up to the ducks and geese on the water and launched the food their way.

It seems like everyone you encounter at Tingley Beach is friendly and happy. That place does that to you. It's so peaceful and beautiful and unlike anywhere else in town. After we fed the birds, we walked over to the rock waterfall that the girls enjoy climbing. It's just big enough to be a challenge for them and just small enough that I don't get too nervous watching them playing near boulders and water. It's so fun to watch them balance themselves as they walk across the tree trunk bridges and up and over the large rocks strategically placed in the streaming water. 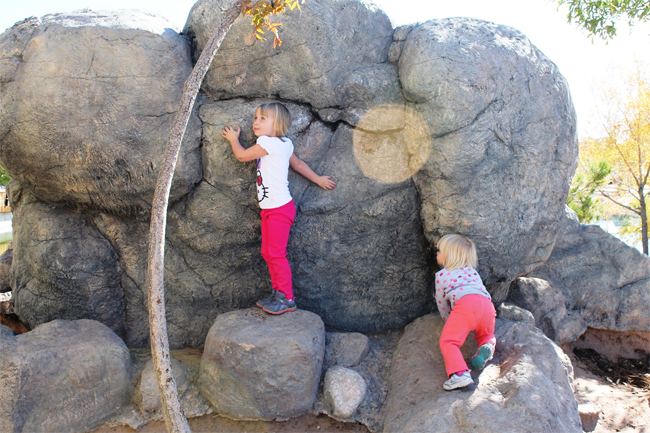 After the rock-climbing adventure, we went to the small river that runs under the wooden bridge. After stomping across the bridge, my girls immediately took and their shoes and socks off to run through the stream. They giggled and squealed when the cold water touched their toes and laughed as they splashed each other. As people walked by, they couldn't help but laugh with the girls and say hello.

Last but not least, we walked over to watch people fish in the pond. Men, women and kids line up along the sandy banks and cast their fishing lines out over the water in hopes of catching a small trophy. As soon as someone catches something they hold it up for a quick picture, then toss it back. My daughters aren't sure why people are holding squirmy fish, but they definitely think it's entertaining to watch them.

Tingley Beach is a great place to see the world through your kids' eyes. They can find joy in the simplest activities, which is a good reminder for us adults to see the joy in our lives too. So if you're looking for a unique place to take your kids in Albuquerque, don't rule out Tingley Beach. It's free. It's fun. And it's refreshing.

Emily Howard, an Albuquerque native, is a marketing strategist with 20 years experience. She's worked at some of the top advertising agencies in the country, ran her own consulting business, and is currently the Director of Accounts at Esparza Advertising. She also writes a monthly column at the "Beyond Madison Avenue" blog on Talent Zoo. Emily enjoys playing and watching sports and an occasional vodka gimlet. She has two amazing and active daughters.