Taking a Ride on the Sandia Peak Aerial Tramway in Albuquerque

While Albuquerque may be famously known for the Albuquerque International Balloon Fiesta and Breaking Bad, a lot of people wouldn't guess that the city is also home to North America's longest aerial tramway. I was one of those people when I first arrived in New Mexico's largest city but, upon learning this fact, the Sandia Peak Aerial Tramway quickly became a must-see.

When I arrived at the Sandia Peak Tramway, no time was wasted purchasing a ticket and hopping in line. Our cable car arrived and nearly fifty people headed into the cable car that would be carrying us to the Observation Deck thousands of feet above.

As the gondola slowly pulled away, our tour guide/cable car operator educated us on a few key facts regarding the Tramway:

- The ride to the top takes about 14 minutes
- Over 2.7 miles of cable is traveled
- The Observation Deck is at an elevation of 10,378 feet
- Four climate zones are passed through on the trip
- The Tramway was completed in 1966, after two years of construction
- The final cost was $2 million dollars 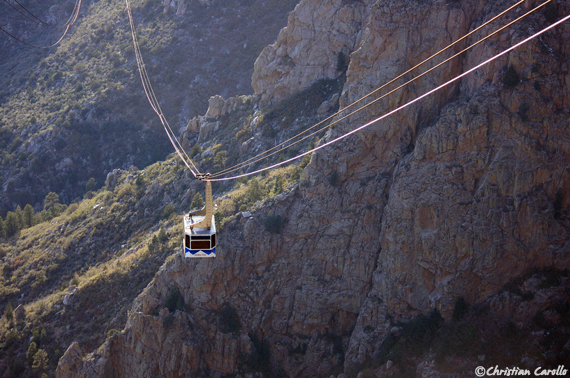 As we continued our journey over the long expanse of cable, all of us in the gondola let out a collective gasp as we endured the slight 'hiccup' that came with passing over each of the two support towers. A little more than half way to the top, our cable car operator pointed out that we were passing over Domingo Baca Canyon, part of which is referred to as TWA Canyon. This name was given because of the crash of TWA Flight 260 on February 19, 1955. The lives of all 16 passengers and crew were lost that day and, while much of the wreckage was removed during construction of the tramway, some still remains on the canyon floor and may be visible to riders of the tram if you look closely.

With sunset quickly approaching, we finally reached 10,378 feet and were greeted by a mountain coated in snow as the passengers piled out of the cable car. Taking the time to snap more photos of the arriving gondolas and spectacular views of the Albuquerque scenery below, I regretted that I didn't set aside more time to explore and experience the many activities available at the top of Sandia Peak. 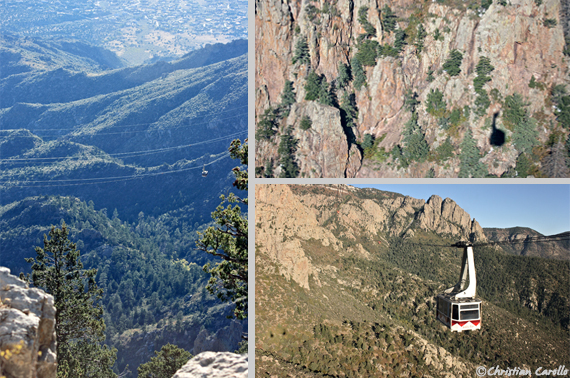 A few things to remember if you find yourself visiting the Sandia Peak Aerial Tramway in Albuquerque, New Mexico:

- Dress warm - there can be up to a 30 degree difference at the top
- Arrive early - there are often long lines for the Tram
- Activities - many trails offer recreational hiking, backpacking and nature hikes. Plan extra time!
- Sandiago's Mexican Grill - this restaurant is located at the base of the Tram and offers scenic views of the city
- High Finance Restaurant - this restaurant is located at the top of Sandia Peak and offers fantastic views while you dine. Be sure to make reservations!
- Weather - the Tram can be closed at times due to high winds, etc. If you're unsure, check the website or call!

Use the hashtags #ThingsToDoABQ and #ABQevents to join the conversation on social media and subscribe to our ABQ365 events email newsletter by clicking below!

Christian Carollo is a travel photographer from Philadelphia who has an undeniable fascination with the United States. He's currently on a mission to visit all fifty states & experience all the beautiful and unique places America has to offer. Join him on his journey at: www.sayhellotoamerica.com.