Since its inception in 2010 the NMBHOC has created year-round programming for the state of New Mexico. The committee takes its lead from Carter G. Woodson, the founder of Negro Achievement Week in 1926 later expanded and renamed Black History Month, who stated, "we should emphasize not Negro History, but the Negro in history. What we need is not a history of selected races or nations, but the history of the world void of national bias, race hate, and religious prejudice."

As the Chairperson of the NMBHOC I've caught a sneak peek into what the festival has in store. This year's slate of events covers three themed weeks of activity:  Arts and Culture (Feb. 5-9), Rhythms and Cuisine (Feb. 9-16), and Mind, Body & Soul (Feb. 19-22). 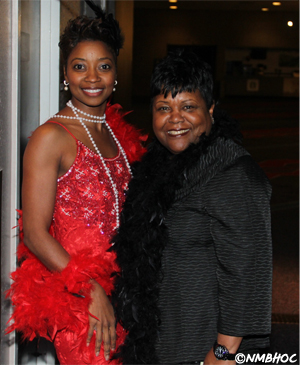 Remember those winds I mentioned earlier? Prepare for a tornado that will hit the African American Performing Arts Center's stage on February 5 - 9 during the hit Broadway Musical The Wiz. The entire set is fabulous (Emerald City costumes will leave you green with envy) and the voices will bring down the rain and out the sunshine.

As you "ease on down the road" into the rest of the festival you'll arrive at the Albuquerque Convention Center for the 3rd Annual Cotton Club Gala: Mardi Gras Mambo (Feb. 15). If you attended the Cotton Club Gala last year, you'll recall feeling as if you walked into a modern day speakeasy. Although the Cotton Club of the twenties was a venue of severe discrimination against African American guests, the NMBHOC's fresh take on the event represents the multicultural landscape of present day America. This year, in keeping with the Mardi Gras Mambo theme, guests will enter a space filled with vibrant colors, intricate masks, and beads galore.

If dancing isn't quite your thing, surely science or fitness gets your blood flowing. We have you covered at the 1st Annual S.T.E.M. Festival in conjunction with WorkItOut Day. The Albuquerque Convention Center West Lower Level will buzz with the sound of robotics and the clattering of Legos thanks to a variety of hands-on exhibits. Curious on how to maintain a healthy lifestyle while keeping your mind sharp? Heath and fitness experts will be available to answer your questions and teach you how to live a life of wellness.

The festival closes on a high note thanks to The New Mexico ONE Choir. This 200 voice interfaith ensemble will open the New Mexico's Gospel Best Singing Competition. A $1000 grand prize is on the line so expect fierce competition from gospel singers around the state.

The work of the New Mexico Black History Organizing Committee is made possible by the support of the City of Albuquerque, Blue Cross Blue Shield of New Mexico, Office of African American Affairs and through numerous grants and individual supporters. Details for each event can be found at nmblackhistorymonth.com or by calling the NMBHOC office at 505-407-6784. Hope to see you there!