It's official: Holly Holm is signed by the UFC 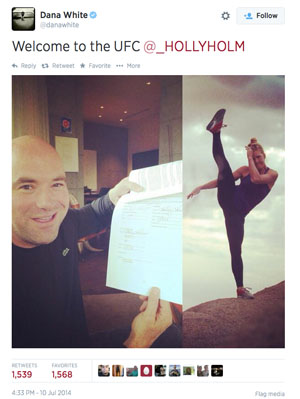 Congratulations to Albuquerque's own Holly Holm, considered to be the best pound-for-pound female boxer in the world, on being signed by the UFC.

The announcement comes this afternoon from UFC president Dana White who tweeted the news.

The UFC's women's bantamweight division got a jolt of significant firepower with the announcement of the signing of unbeaten Holly Holm, one of the hottest prospects in MMA and a former world boxing champion.

ABQ365 is a comprehensive events calendar and blog for the greater Albuquerque area, managed by Visit Albuquerque (the Albuquerque Convention & Visitors Bureau).