Get Your Kicks on Route 66

It's historic, it's filled with classic eateries and it glows with neon.

Route 66, colloquially known as the Main Street of America and/or the Mother Road, is worth exploring during any season in Albuquerque.

Route 66 was established in 1926, running 2,448 miles from Chicago (including my father's hometown of Wilmington, Ill.) to Santa Monica, Calif., including a corridor through New Mexico that has been named a National Historic Byway.

In Albuquerque, it follows Central Avenue on an 18-mile journey from the west mesa (complete with a neon 66 archway) to the entrance to Tijeras canyon. Classic motels from the 1930s dot the route, some still open such as Tewa Lodge and others awaiting renovation such as the classic 1939 De Anza Motor Lodge. Downtown's KiMo Theatre, which opened in 1926, and the Lobo theater in Nob Hill, built in 1939, are classics from a bygone era. 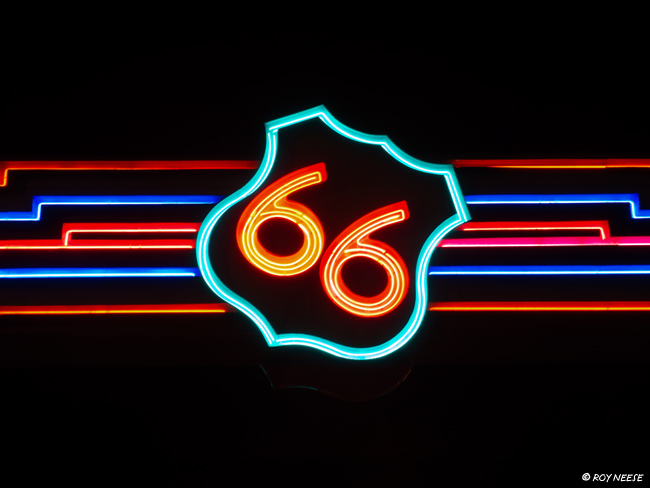 But Route 66 didn't always run east-west through the city.

Before 1937, Route 66 went from Santa Rosa to Santa Fe, then south into Albuquerque along 4th Street and on to Los Lunas before turning west and connecting to the present Interstate 40 route at Laguna Pueblo.

The El Camino Motor Hotel, still with a bright neon sign outside, is the sole survivor of 19 hotels along the 4th Street/Route 66 corridor that catered to that era's tourists. This particular route follows the historic, 1,600-mile El Camino Real de Tierra Adentro, the Royal Road of the Interior Lands, stretched from Mexico City to San Juan Pueblo/Ohkay Owingeh north of Santa Fe. Spanish explorer Juan de Oñate established the northern portion of the trail into what is now New Mexico in 1598, and claimed the land for Spain.

Political revenge rerouted the road from Santa Rosa and into Albuquerque from the east along the present-day I-40 corridor. At the turnoff to the Route 66 Casino Hotel west of Albuquerque stands a Route 66 fossil: the old metal-truss bridge over the Rio Puerco, built in 1933.

Santa Fe business land speculators and politicians, known as the "Santa Fe Ring" controlled the state in the late 1800s and into the 1920s, and their campaign ousted one-term Gov. Arthur Hannett. Blaming the Santa Fe Ring for his ouster, Hannett used the remaining days of his term to order the construction of a cutoff road from Santa Rosa into Albuquerque, bypassing Santa Fe. The road opened Jan. 3, 1927, even as incoming Gov. Richard Dillon was trying to get construction stopped. 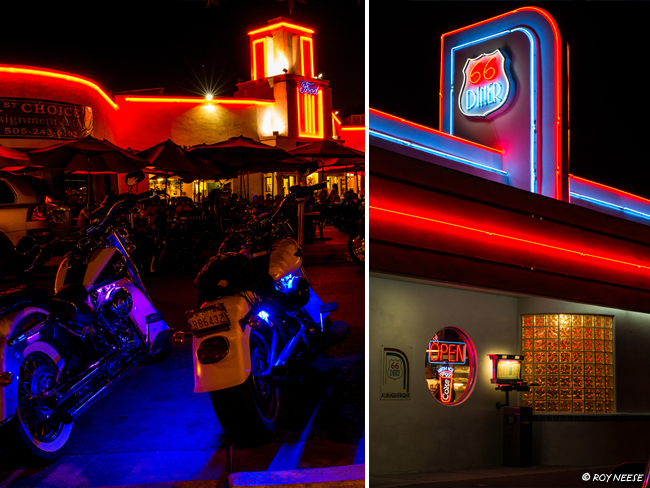 Neon defines the stretch through Albuquerque, especially the buzzing energy around the University of New Mexico and Nob Hill, just east of UNM. Turquoise and red neon radiates from the '50s-style 66 Diner while Kelly's Brew Pub has turned a car dealership/gas station on what was once the edge of town into a trendy beer and burger joint.

Even the Albuquerque Police Department is into neon: at the entrance to Nob Hill, the police substation is the former art deco-style Valentine Diner moved from downtown. The counter inside is the diner's original gleaming stainless steel.

Nob Hill is awash in neon, from a tail-wagging red Scottie to a vintage hotel sign advertising "color TV." 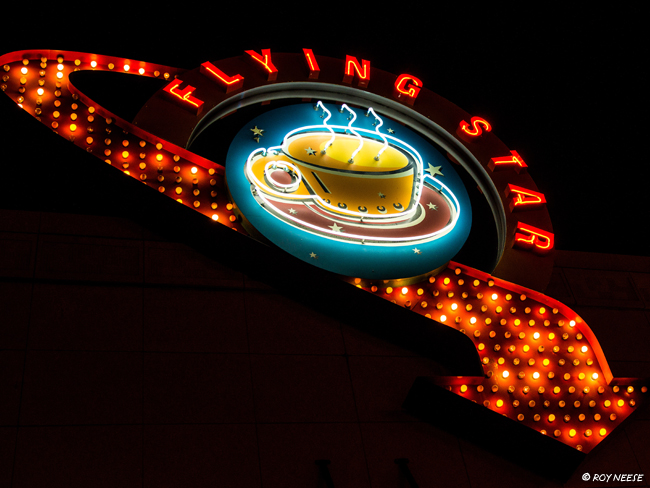 Is food where you get your kicks? From the 66 Diner's classic milkshakes to the "Breaking Bad" Dog House, you can find iconic Route 66 food. If your tastes run a bit fancier, the stretch is also home to great barbecue at The Cube (Guy Fieri ate there), tacos at Zacatecas, Greek at Yanni's and yes, you can eat in a former fire station at the Monte Vista Fire Station pub. There's a plate for every palate, and you're going to need to fuel up, because exploring Route 66 requires some energy! If you get tired of walking, head to the Alvarado Transportation Center and catch a ride on Route 66 all the way home.

Use the hashtags #ThingsToDoABQ and #ABQevents to join the conversation about Albuquerque events on social media and subscribe to our ABQ365 email newsletter by clicking below!

Roy Neese is a newly minted Albuquerque resident, coming to New Mexico to warm up after 16 years in Alaska, including the last three promoting Alaska tourism as a content/social media specialist and photographer for Visit Anchorage. An avid cyclist, he is rapidly adjusting to cycling without using studded tires.