A Taste of Albuquerque: From Chile to Sopapillas

The memory of certain tastes is a powerful way to reconnect to home, especially if we live far away. I was born and raised in Albuquerque, but have lived in Europe for the past 30 years. When I think back to our family visits to the New Mexico State Fair when I was a child (it's still held in Albuquerque every September, and has just had its 75th anniversary in 2013) I vividly recall the aroma and taste of Indian Fry Bread: hot and crispy, and served with powdered sugar.

Two other childhood favorites of mine, uniquely New Mexican, are sopapillas (also spelled sopaipillas) and Hatch green chile. Flame roasted green chile from New Mexico, fresh or canned, has a glorious flavor, and can be used in everything from arroz con pollo to green chile stew. Chile is the number one cash crop in New Mexico, and in 1996 the New Mexico State Legislature passed a House Joint Memorial declaring "Red or Green?" (short for, "would you like red or green chile with your meal?") as the official state question.

Sopapillas are made from flour, water, salt and shortening, similar to flour tortillas, except they're deep fried and puff up like little rectangular or triangular balloons, about the size of your fist. But why do they puff up? I once asked this of Lisa McKee, professor of human nutrition and food science at New Mexico State University, and she explained: "The heat causes water in the dough to turn to steam fairly rapidly. The steam is trapped for a period of time in the dough and since steam has a large amount of energy, it forces the layers apart - thus the puffing."

As for family favourites, I love my father's recipe for salsa: A few tomatoes, a sprinkle of sugar (to improve the flavour of the tomatoes; omit if homegrown, as my father's always were), scallions, garlic, a jalapeño pepper, and fresh coriander. My father always put the jalapeño in boiling water for a few minutes before chopping to bring out the flavor. This he learned, many years ago, during a culinary conversation with another fisherman (a fisherwoman, actually) at Tingley beach, part of the Albuquerque BioPark.

What's your favorite food from Albuquerque?

I would love to hear from others who have visited Albuquerque recently. What are the tastes of Albuquerque you bring back in your suitcase? (I bring back little cans of Hatch green chile). 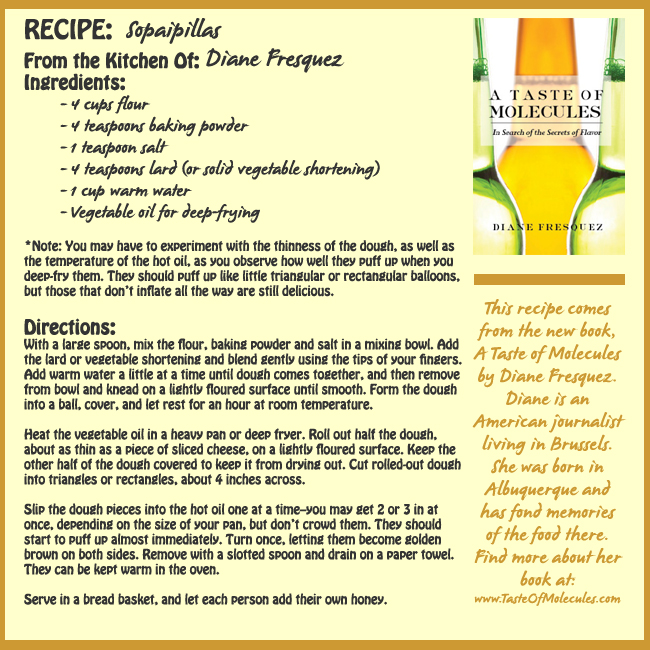 Diane Fresquez lives in Brussels, Belgium and for many years wrote and edited for the Wall Street Journal. Her new book, A Taste of Molecules: In Search of the Secrets of Flavor is a popular science book that explores food and memory though stories and recipes - with a gentle helping of science. To read the first chapter, please visit www.tasteofmolecules.com.